Ketamine vs Esketamine (Spravato): What is the difference? 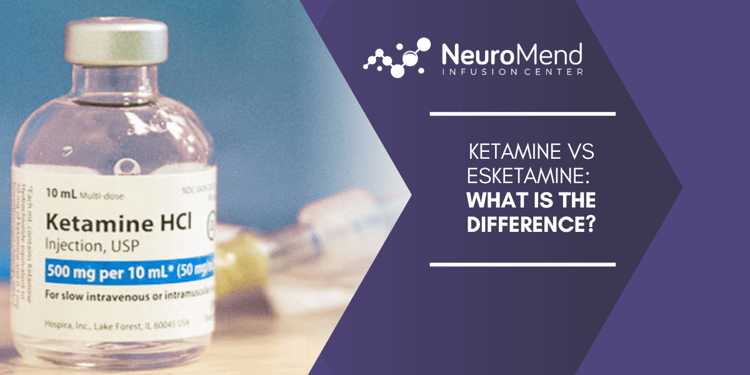 Many patients are finding relief from treatment-resistant depression, PTSD and other chronic illnesses by utilizing ketamine to improve their symptoms.

Now with the FDA approved form of ketamine (Spravato or esketamine) hitting the market, many consumers are curious about the difference between the two.

Let's dive into everything you need to know about the difference between ketamine and Spravato.

Ketamine has begun to solidify its place in the treatment of Major Depressive Disorder (MDD) across the globe.

Studied for its ability to loosen repressed emotional trauma and improve the effects of psychotherapy (MDMA, LSD, Psilocibin) since the early 70’s, ketamine has evolved into one of the most novel treatments for MDD in this century.

Since 2006 ketamine has been studied more in-depth for the treatment of “Treatment-Resistant Depression (TRD)” with a success rate that has climbed as high as 80% or better for many patients who suffer with this debilitating disease.

Thousands of people are placed on antidepressants such as SSRIs, SNRI, and other widely prescribed medications that are ineffective in reducing depressive symptoms. Many of these medications take weeks to months for effects to be realized and often end up starting all over, creating a vicious cycle of one failed treatment after another.

With the success of ketamine therapy used intravenously seen across the nation, the creation of an FDA approved treatment was inevitable. In 2019 a nasal spray, esketamine, also known as Spravato, was approved for the treatment of Treatment-Resistant Depression.

With the addition of this new medication, patients now have the option to utilize ketamine or esketamine treatments for their depression.

The science behind ketamine and esketamine

For those interested in the science of ketamine and esketamine, continue reading.

(Click here to skip ahead to compare and contrast of ketamine and esketamine.)

Ketamine is a racemic mixture of two enantiomers that are mirror images of each other, S-ketamine (esketamine) and R-ketamine. Esketamine is the S (+) enantiomer of ketamine.

One of the enantiomers, S-ketamine (esketamine), binds more potently to the N-methyl-D-aspartate receptor than the other enantiomer, R-ketamine. Both enantiomers of ketamine have been researched but so far there is no conclusive evidence about which enantiomer is better for the treatment of mood disorders.

Spravato was created by taking the (S)-enantiomer of ketamine.

Both medications are given under the direct supervision of trained healthcare providers.

Ketamine and esketamine are very similar in terms of their molecular structure, yet they do differ.

Let's dive into the details of both ketamine and esketamine, in terms of administration, dosage, bioavailability, administration time-frame, medication conjunction, treatment timeframe, and insurance coverage.

For more information on the Spravato Savings Program, how to apply and how to use, click "learn more" below!

NeuroMend Infusion Center is a Risk Evaluation and Mitigation Strategy (REMS) facility, certified to provide SPRAVATO™ (esketamine), a nasal spray approved for use in conjunction with an oral antidepressant in adults with treatment-resistant depression (TRD).

People who are currently struggling with major depressive disorder (MDD) may have TRD if they have not responded adequately to at least two different antidepressants of adequate dose and duration in the current depressive episode.2

Which treatment is best for you?

Contact NeuroMend for further information to see which option will be best for your treatment.

Ketamine vs Esketamine (Spravato): What is the difference?

Many patients are finding relief from treatment-resistant depression, PTSD and other chronic illnesses by utilizing ketamine to improve their...

How LSD assisted psychotherapy is used to treat anxiety, OCD,  PTSD, depression and in healthcare.

What is Assisted PsychoTherapy?

For those involved in patient care, it is important to be aware of the nature and prevalence of suicidal behaviors and the factors that are...