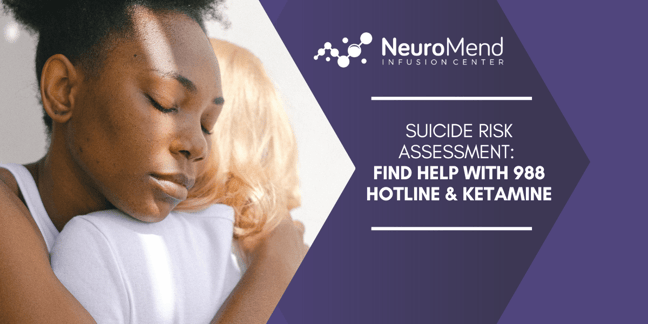 For those involved in patient care, it is important to be aware of the nature and prevalence of suicidal behaviors and the factors that are associated with suicide.

The annual U.S. suicide rate increased 30% between the year 2000 and 2020. Suicidal ideations and behaviors are most commonly found among people with anxiety, bipolar disorders, chemical dependency, personality disorders, psychiatric disorders, PTSD, and schizophrenia.

Factors That Contribute to Suicide and Suicidal Ideation

The most common determinant of future suicide attempts is history of attempting suicide and intentional self-injury (without expressing the intention to die).

Some risk factors are immutable (age, gender, race/ ethnicity), while others are situation-specific (loss of housing, exacerbation of pain in a chronic condition, onset or exacerbation of psychiatric symptoms). Because of this, no risk factor nor protective factor ensures engagement in suicidal behaviors; these factors are not equal.

A clinician uses their knowledge of an individual’s risk and protective factors to better evaluate their current risk for suicide.

Factors that may increase a person’s risk for suicide include:

Protective factors, which decrease the risk for suicide, include:

Although there are several risk factors, they alone do not increase or decrease the risk of suicide. Research suggests that the risk for suicide increases with an increase in the number of risk factors present.

In the event that a clinician should see these signs, there is a critical risk for the expression of suicidal behaviors, especially in those individuals with other risk factors. There are three factors which are more likely to cause short-term appearance of suicidal behaviors and require immediate attention and evaluation.

If any of the these signs are present, you should immediately request further evaluation from a mental health provider.

The remaining warning signs should alert the clinician that a mental health evaluation needs to be conducted in the near future and that precautions need to be put into place immediately.

It isn't easy to ask personal questions about suicidal ideation, intent, plan, and attempts. Although sometimes patients ask about suicide, usually the topic does not present itself from the complaint and the gathering of history related to the present illness.

By setting the stage for a series of questions and signaling to patients that the questions are a natural part of the overall assessment.

I appreciate how difficult this problem must be for you at this time. Some patients with similar problems/symptoms have told me that they have thought about ending their life. I wonder if you have had similar thoughts.

The questions form a cascading questioning strategy where the answer would naturally lead to another question, which will elicit additional important information.

Are you feeling hopeless about the present or future? If yes, ask…

Have you had thoughts about taking your life? If yes, ask….

When did you have these thoughts, and do you have a plan to take your life?

It is important to ask people about a history of attempts, feelings of hopelessness, and ideation. Although most people who attempt suicide do not attempt again, about 16% repeat attempt within one year and 21% repeat within 1-4 years.

For people 10-34 years, suicide is a leading cause of death. In 2020, every 11 minutes there was one death by suicide. Because of the increase in people who are experiencing suicidal crisis, the 988 hotline was created to connect individuals directly to mental health professionals with the 988 Suicide and Crisis Lifeline, by call or text.

The 988 Suicide and Crisis Lifeline is a national network of 200+ crisis centers, open 24/7 and is supported by local and state sources.

Standardized antidepressant treatments do not work for everyone. These treatments can sometimes take weeks, or even months, to take effect. During a time period when patients are at risk for continued suffering and suicide attempts, these treatments are not the most ideal.

Ketamine infusions, like other assisted psychotherapies (MDMA and Psilocybin), are a great alternative treatment for individuals and veterans dealing with suicidal ideations and suicide risk.  Ketamine for depression treatment (also used in emergency rooms) provide quick and powerful relief, even to people whose depression and ideations have repeatedly failed to respond to other medications.

Most recently, ketamine has been used to treat mood disorders and severe depression, however, recent studies have shown that ketamine has improved the thinking and reasoning of those who expressed thoughts of suicide.

The study found that one dose of ketamine not only reduced the severity of depression in people with suicide ideation, but also made them feel safer and less likely to harm themselves because it rapidly diminished their suicidal ideation.

Ketamine Infusion therapy begins with low dose infusions for the treatment of severe mood disorders. Adjustments can be made during an infusion as well as from one infusion to the next. With a small dose of Ketamine, depression, anxiety, and suicidal ideation decrease.

See here for information about Spravato.

ASK US ABOUT KETAMINE INFUSIONS

NeuroMend Infusion Center is a ketamine clinic providing ketamine infusions in the Acadiana area, as well as across the state of Louisiana.

We treat patients suffering from depression, anxiety, bipolar disorder and other psychiatric disorders, as well as those struggling with chronic pain conditions.